Football can broadly be broken down into four moments of play. These include when in possession, out of possession, transition to defence and transition to attack. However, it was Pep Guardiola himself who noted that all four moments of the game are constantly interrelated and influencing one another. This shows how when in possession teams must also be aware of how that will influence them if they lose the ball.

This tactical analysis will look at the tactics teams use when in ball possession so to control the transition when they lose the ball. In particular, tactical theory will be used to explain how possession play influences a teams ability to effectively transition.

When setting up a style of play in regards to when a team has the ball, the coach must be wary of how they wish to play without the ball. This is because space has a huge function on a football pitch. It determines everything from the decisions of the ball carrier to his teammates and opponent. The way one attacks will create spaces and therefore the way you attack affects your transition.

For example, a team that counter-attacks in an extremely swift manner will usually create spaces vertically. This will occur if the backline cannot match the speed the ball carriers and runners progress up the pitch. In end to end games, this is typically the case.

As seen below, a team such as Mexico which breaks quickly will have a hard time to regain the ball immediately in transition. This is due to the huge gaps between lines.

As a result, the ball carrier from the opposition will have increased time on the ball. Furthermore, there will be fewer players in close proximity to the ball carrier to cut off his immediate passing lanes. Therefore the ball carrier will usually have more options in terms of players to pass toward. 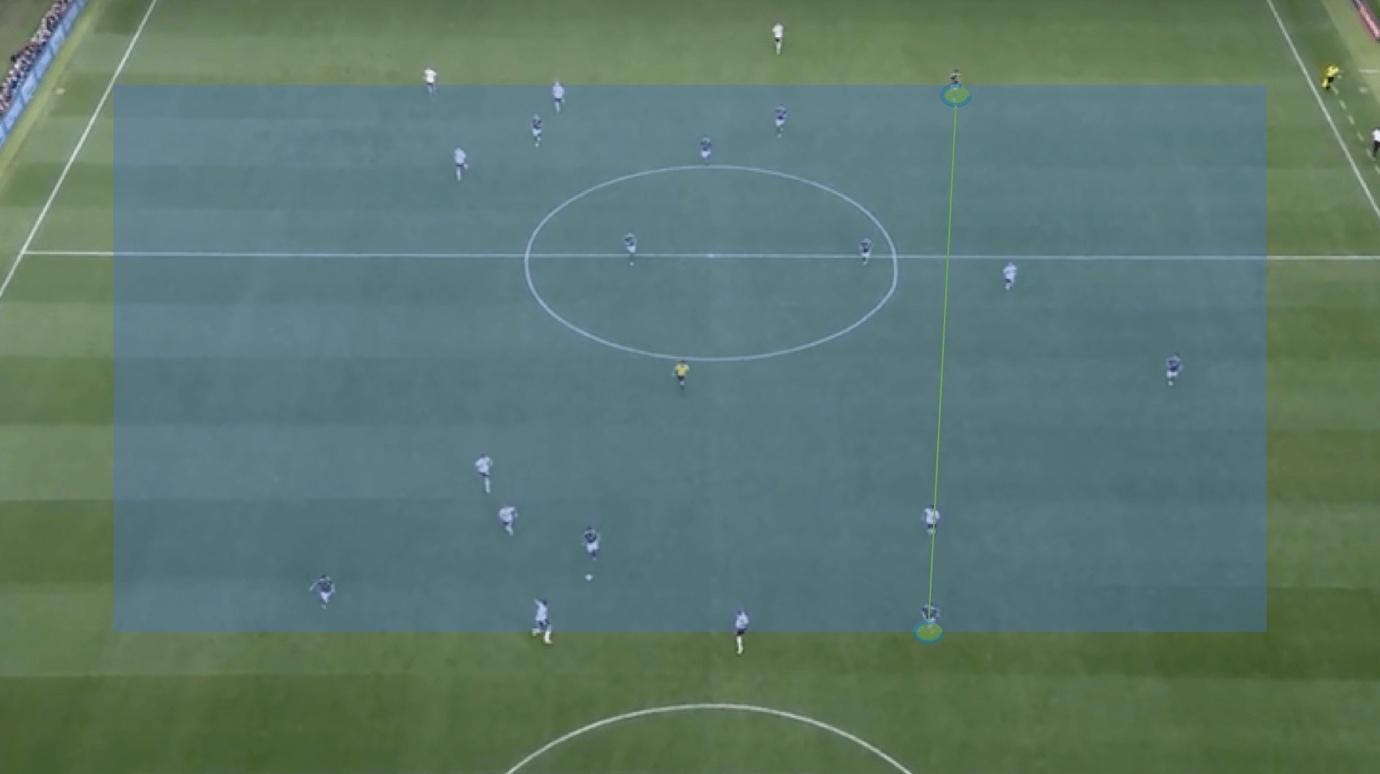 When Mexico break with the speed of players such as Javier Hernandez it makes it hard for the backline to follow and condense space.

With the increased passing options and time, he or she is better equipped to pick out an opponent or carry the ball up the pitch. Therefore teams who look to win the ball back immediately will need to be vertically compact.

This is seen in the example below with Barcelona. The distance between the defensive line just out of the picture and the front line is much shorter. This reduces the space both between lines and from each individual to their opponent. In turn, it makes it easier to press and direct the ball carrier. Additionally, teams can then implement pressing tactics such as a cover shadow.

Barcelona’s defensive line is high up on the pitch around the halfway line in order to increase vertical compactness.

Another theory which reduces the spaces that appear on a football pitch is to be horizontally compact. Just as some teams will defend extremely narrow, they can also attack in the same fashion. By progressing the ball up the pitch in a narrow formation, teams can, therefore, reduce the spaces that occur in transition.

In the example of Red Bull Leipzig here, they have seven players in the central area of the pitch. Often when playing a diamond midfield they can even have eight players through the middle of the pitch. Therefore they are closer in distance to the ball if lost in transition centrally. Furthermore, they only have two players creating width and even both of these players aren’t touchline wide. 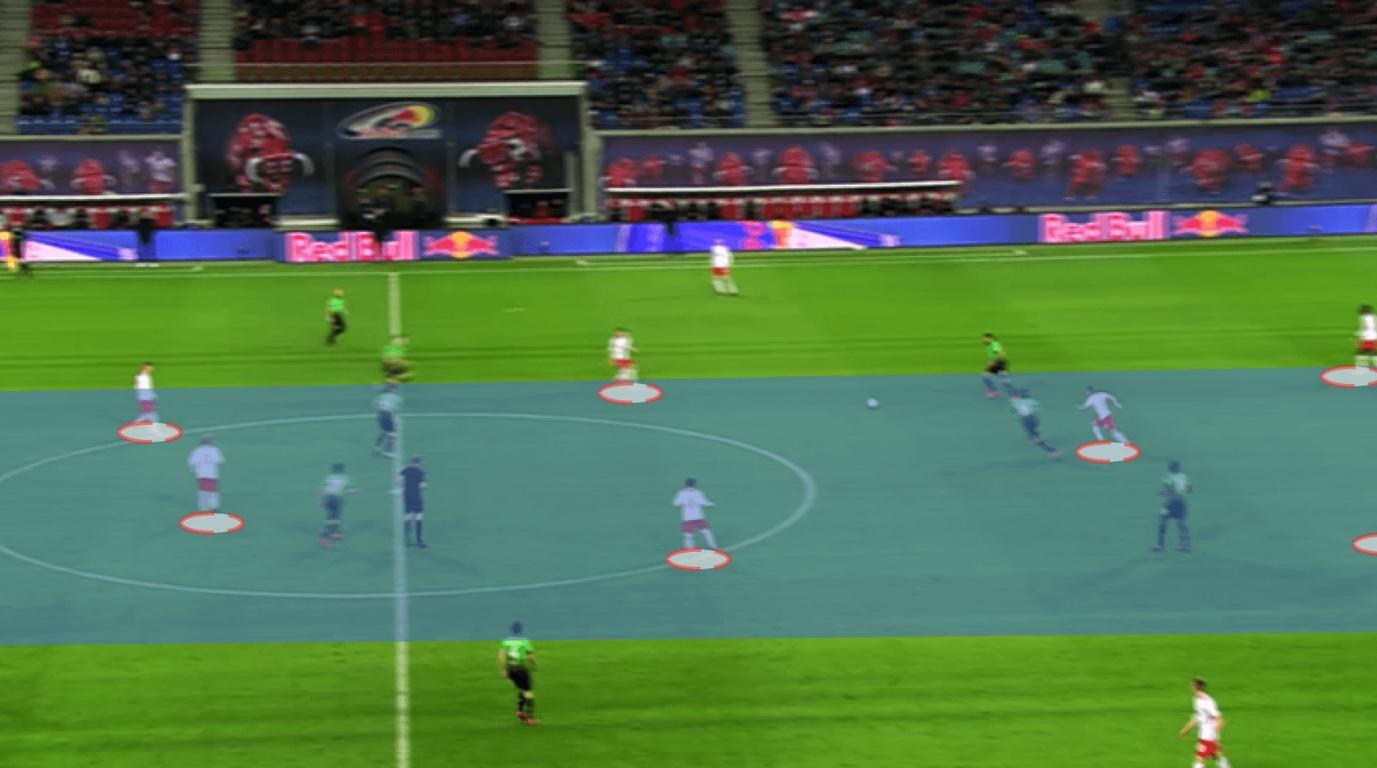 Red Bull Leipzig often play a midfield diamond, which can mean eight players through the central area of the pitch.

With an analysis of Bayern Munich under Carlo Ancelotti below, we can see quite a difference. Bayern would often play with both Franck Ribery and Arjen Robben high and wide on their respective touchlines. Additionally, on occasions, Phillip Lahm and David Alaba could also provide width. This, therefore, opens the pitch for Bayern and stretches Real Madrid aiding ball circulation. However, we can also see how in transition it means there are much bigger distances and spaces for Bayern to cover.

In this instance, Robben has positioned himself high and wide on the touchline. Moments before Ribery is also doing the same. Arturo Vidal attempts a long switch which is intercepted by Marcelo. Due to the open shape of Bayern, they have no players in the immediate vicinity to effectively counter-press and regain possession. 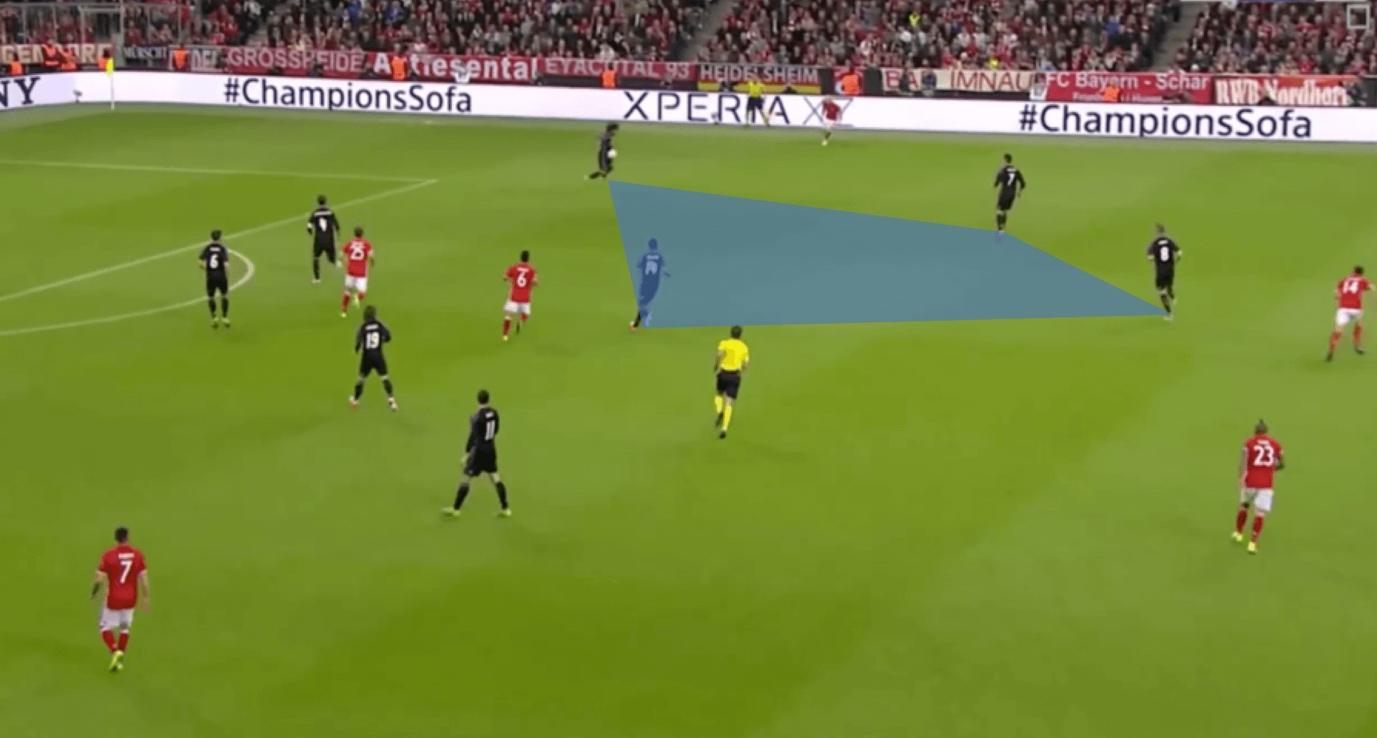 Bayern’s open shape means there are a small number of players in the immediate area where the ball is lost.

The other factor which has an effect on transition is the direction of play. It is closely tied to horizontal compactness. Teams can play in a fashion that spans the whole pitch such as Bayern below. Again the risk with this is that your team is more spread out and open in transition. However, it also makes it easier to keep the ball as you have opened up the pitch, usually creating more time and passing options for the ball carrier. 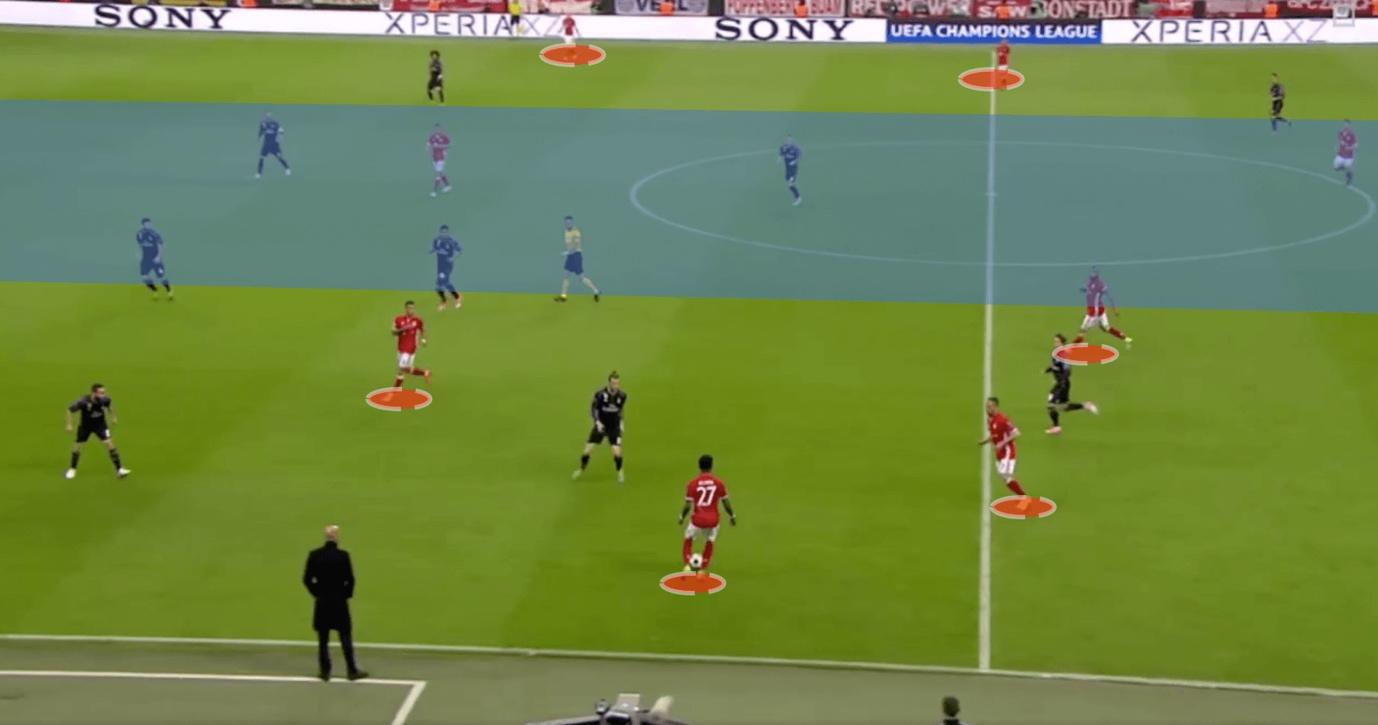 Even with the ball on the other side, both Phillipe Lahm and Robben keep their width to open the pitch up and allow for play on both sides.

Playing centrally, however, also comes with another factor to consider for the transition. If a team plays into a central area and loses the ball, the opposition has both sides of the pitch to transition into.

As seen in the example below, Burnley play the ball into a central area and subsequently lose possession. When Roberto Firmino receives possession he then has both Mohamed Salah and Sadio Mane available to pass to, thereby increasing his options in transition. If Liverpool were to regain the ball in a wide area, they would only be able to play inside. Therefore the team who loses possession could press them outward using the touchline as a defender. 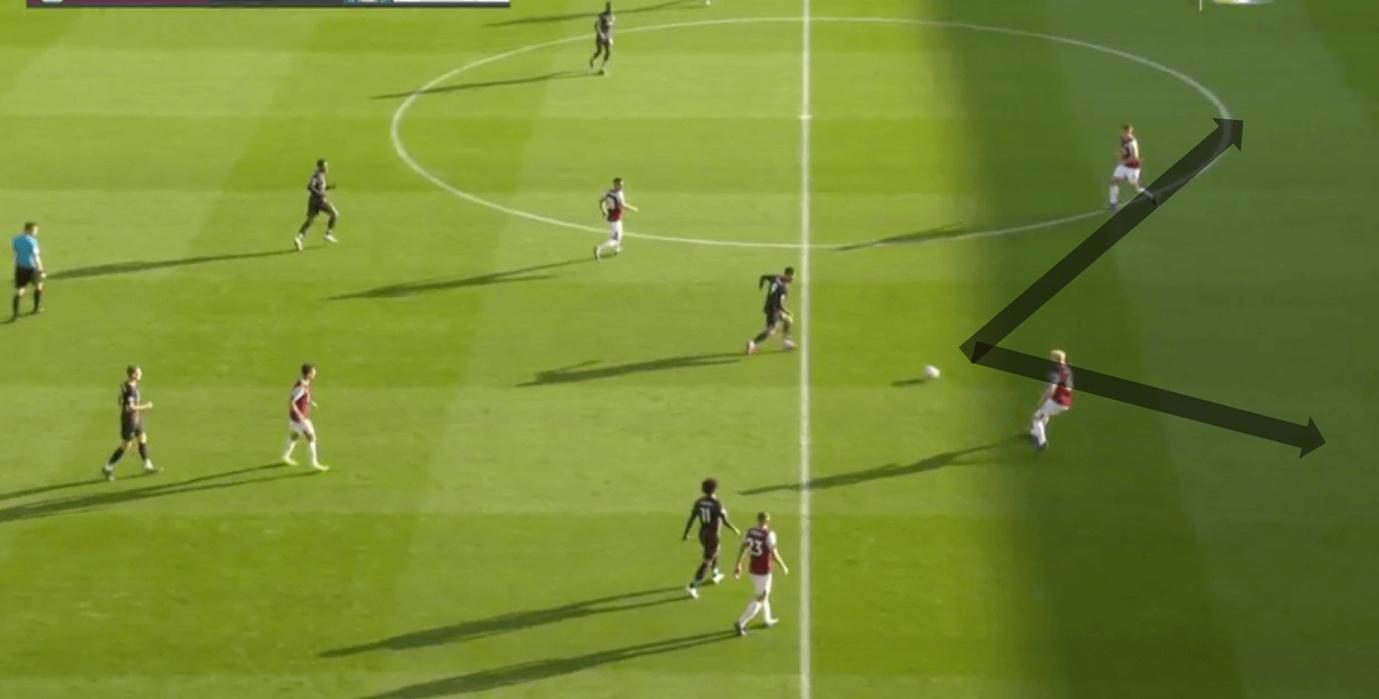 As Firmino wins the ball centrally, he has both Salah and Mane available to pass to.

RB Leipzig rely on their extremely quick and early transitions in order to counter this inherent risk in their play style. Additionally, their overload in the central areas helps to control the transition.

Teams can also play around the opponent, specifically into wider areas. If a loss of possession occurs it is therefore near the touchline. As mentioned previously, the by-line can act as a defender in transition when the team looks to counter-press. In the instance below, if Ajax loses the ball, they can immediately press Tottenham as they have numbers around the ball. Additionally, by keeping them wide, they reduce the space and passing options for Tottenham to play into.

Speed, number and length of passing

The speed, number and length of passes also has a huge influence on defensive transition. This is because the speed and length of a pass will have knock-down effects. Longer and quicker passes move the focal point of the game more quickly, thereby potentially leaving less reaction time for the players in case of ball loss.

In this instance below, it is vital when playing vertically and quickly that you are playing into areas with numbers if you are looking to regain possession immediately. In Red Bull Salzburg under Marco rose, the centre backs would play longer, flatter passes directly into the overload as seen below. This consequently means they also play fewer passes in order to progress up the pitch.

Salzburg miss consecutive lines in order to ensure transitional play and numbers around the ball. This often means long flat passes into the feet of the strikers.

You can also see the horizontal lines of each individual Salzburg player. Often they will miss multiple lines in order to have multiple players behind the ball and moving forward in case of possession loss. These players can then press immediately or receive a pass back from their teammate if the pass is successful from the centre back.

Teams such as Manchester City, on the other hand, tend to build up with a greater number of shorter and safer passes. This is less risky and allows the team to arrive on the halfway line in comfortable possession. They will tend to make the “extra pass” as Guardiola puts it, often building through each consecutive line. This means it then takes longer to progress up the pitch than say a Red Bull Salzburg. It is vital to their system however as there is less chance of losing the ball and being vulnerable in transition due to their open shape.

In the example below, rather than play a long vertical pass into the striker or number ten, Man City will look to build through the next successive vertical line, rather than miss out lines as Salzburg do. As a result, Vincent Kompany plays back to Ederson in a more safe and controlled manner. He does this as the defensive midfielder isn’t accessible. They then look to switch the play. In doing so, they potentially free up the defensive midfielder or another midfielder may drop. They will then progress through shorter safer passes up the pitch. 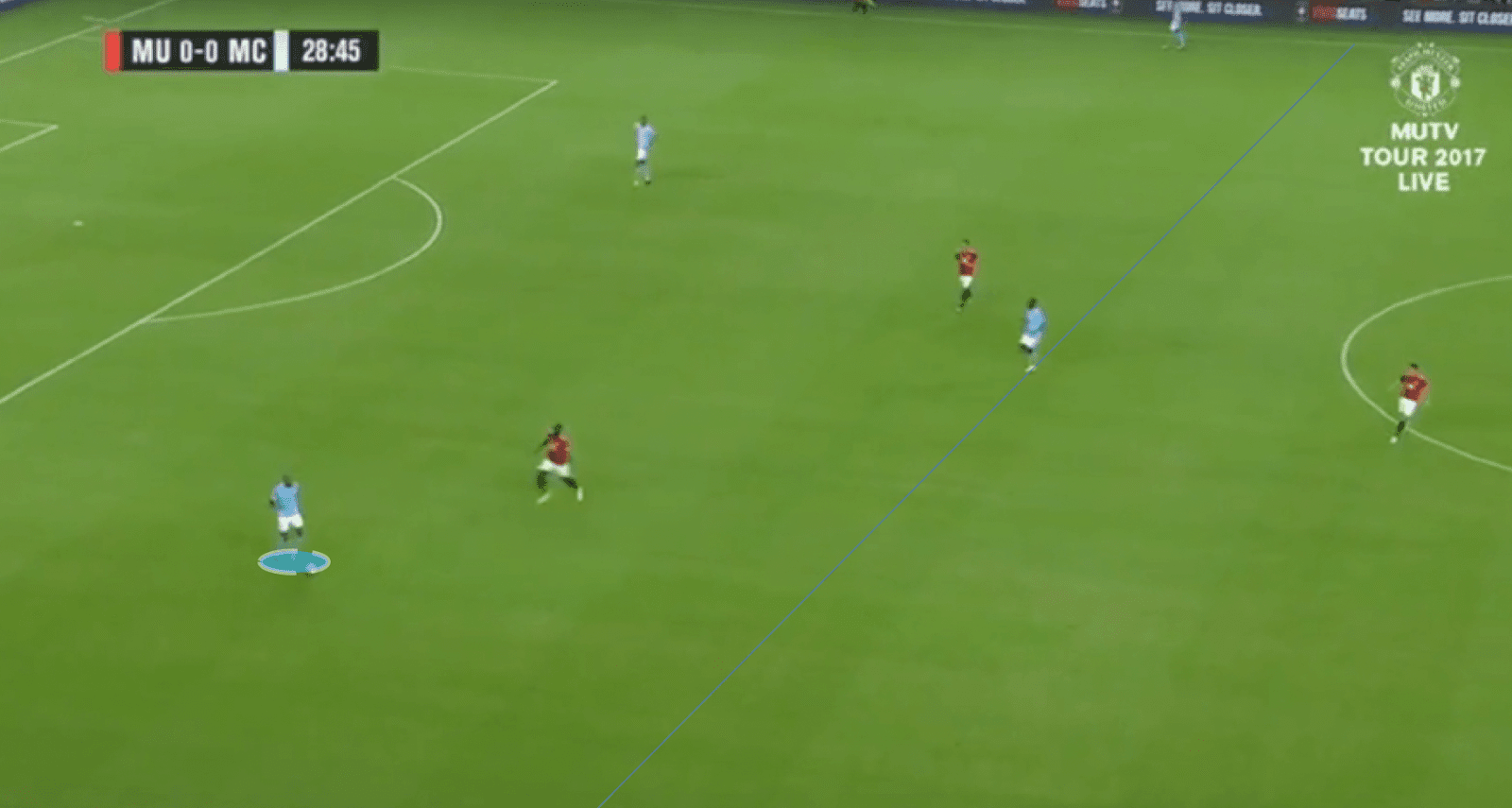 Kompany elects to switch play through Ederson rather than try a longer flatter pass into the feet of David Silva just out of the picture.

Differing approaches to the defensive transition

Therefore we can see how teams who look to be proactive both in and out of possession will usually operate in two main ways. On one end of the spectrum, the team will build up slowly with both width and depth in possession. They will look to create more established and lengthy phases of possession through a higher volume of shorter and safer passing. This is in order to create an optimal transition setting.

On the other end of the spectrum are teams who will favour a quicker and more vertical build-up, often with longer initial passes. These systems then tend to be compact both vertically and horizontally to make up for the more risky approach in possession and therefore control their transition.

This tactical analysis has shown how vertical and horizontal compactness in possession interlinks with a teams defensive transition. Furthermore, the type of build-up in terms of passing number, length, direction, and speed have an additional effect on a team’s ability to transition in and out of possession.

It seems that to play with verticality, width and depth is possibly counter-intuitive. Teams that would attempt to do so, could be extremely vulnerable in transition. This is a possible reason why such a system is rarely seen in football and why teams tend to fall in somewhere along the spectrums of Leipzig/Salzburg and Manchester City.

The collapse of the transfer market, and when it will return.

“Imagine there were no transfer fees, it isn’t hard to do, only free transfers, and a couple of loans too” It may not have made John Lennon’s final draft but as an existential questions for Read more…

Sack the manager. Get him out of the club. Absolutely clueless. You don’t have to go far into the realms of twitter, forums, or Youtube channels to find someone ranting about how their football club Read more…