The Use of Asymmetrical and Atypical systems in Football.

Football systems tend to come in many shapes and sizes. Usually, most systems these days have been implemented or tried out in one form or another. However, occasionally we will see some systems and formations that are uncommon. Today’s analysis will specifically focus on asymmetrical and atypical systems in football.

Firstly, Asymmetrical formations refer to formations which have parts and aspects, such as their shape, size and arrangement; that are not equal or equivalent.

Asymmetrical formations would fall under the more overarching umbrella of atypical football systems. These refer to systems of organization which are unusual or different from others of a similar type. 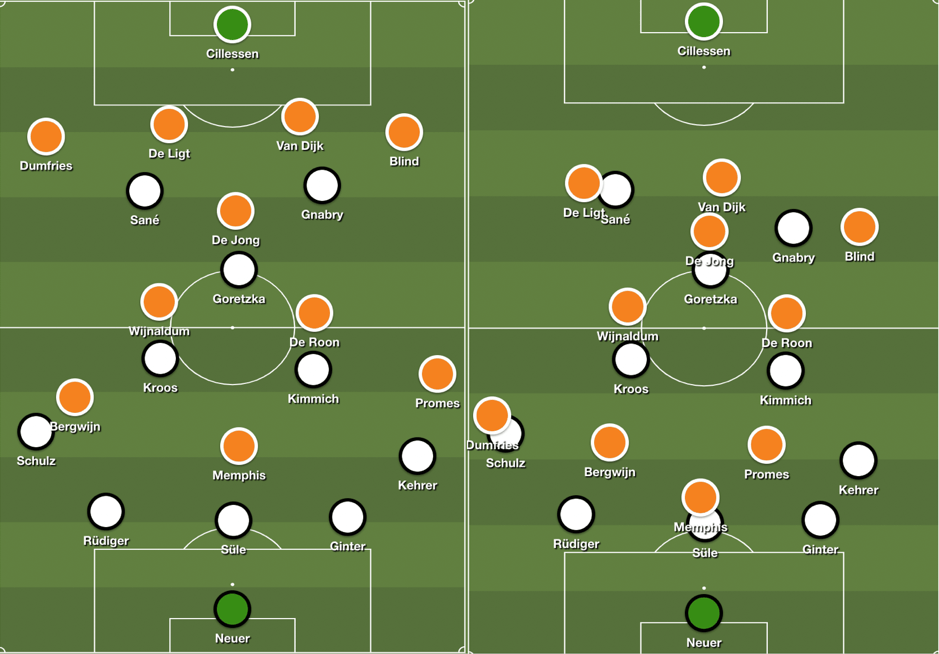 Here an example of symmetrical differences. We see here the symmetrical and typical 4-3-3 shape that Holland started the game with on the left. On the right is the resulting asymmetrical shape that eventually took place in the game.

There are many advantages to taking up an asymmetrical and/or atypical shape in football. In this example, Holland can create overloads on a specific side of the pitch. Overloads may be used to target one specific weakness of the opposition.  In this shape for example, Holland may have been attempting a variety of different schemes. The high positioning of Dumfries can pin back Schulz for one. They may also have judged Schulz to be less effective defensively than Kehrer and this married well with Dumfries attacking ability. Either way, the asymmetrical overload on the right side was the main point of attack for Holland during the match.

Points of attack for Holland during the Germany game.

Another key advantage of these systems is that it allows a coach to gain the best out of the specific abilities’ held by each player in his team. Often a coach will not have the exact player types to carry out a perfectly symmetrical formation. In the example of Holland above, Blind is more suited to playing as an extra centre back, whilst Dumfries is excellent offensively as a wing back. Therefore it can make sense to organize in such a way to gain the best use of the differing attributes of each player.

Pep Guardiola would be one of the finest executors of atypical strategies, using it throughout his time as a manager. Pep is seen as the prime example of a manager who sticks to his principles. However, he is actually quite dynamic in the way he sets his teams up.  His tactical set ups are based on his own personnel and the opposition. They are tweaked constantly to gain the best out of his current crop of players. Furthermore, he is constantly looking to improve weaknesses. Pep often uses asymmetrical and atypical formations or set ups to accentuate strengths and improve his sides weaknesses. At times, he will completely morph structures, whilst holding symmetry. For example, when City change from a 4-3-3 to a 3-4-3 in game through the rotation of players. Other times, he occasionally employs lopsided formations.

Pep quickly set about transforming Barcelona when he first arrived. Off went Ronaldinho and Deco to name a few. Pep placed his faith in a diminutive Argentinian who you may have heard of, Lionel Messi. He set up Barcelona to allow Messi to flourish. Pep did this in a number of ways. The Spanish manager used an atypical 4-3-3 shape in order to disrupt the opposition and create space for Messi to exploit. The famous 2-6 away win at the Bernabeu was the birth place of the false nine system for Barcelona.  It involved employing Messi as a false nine, whereby he would drop into the midfield space. He would be unmarked as Eto’o and Henry would threaten with runs in behind if the centre backs stepped up with Messi.

Pep continued with many iterations of atypical structures throughout his time at Barcelona. Here we could see Dani Alves playing as a winger with Abidal taking up more of a centre back role. This allowed for overloads on the right hand side of the pitch.

When Sanchez and Fabregas joined Barcelona, again Pep re-arranged his players to get the best out of them. This trend has continued throughout Pep Guardiola’s career.

With Bayern, he inverted the full backs in order to better maintain possession. This was in response to him realizing that Bayern weren’t as capable as Barcelona in certain areas. Predominantly in ball circulation and one on one defending in counter press situations.

By bringing the full backs inside and inverting them, it gave Bayern closer and safer options on the ball. Furthermore, it meant they were closer to press in transition.

Here we can see one such example. Bernat is playing higher as a winger and Rafinha playing more as an inverted wingback.

Then finally with City, we have seen many variations of the classic 4-3-3. Pep will often use inverted full backs or centre backs in conjunction with an out and out winger. The inner positioning of Walker in this example, is combined with Sterling on the right wing. It creates a better angled pass out to the winger. Pep would use this in games where he wanted to stretch the opposition with width.  On the other side, this would be achieved with varying combinations.  It would vary with Sane and an inside fullback such as Delph/Zinchenko or Laporte as a false full back if you will. 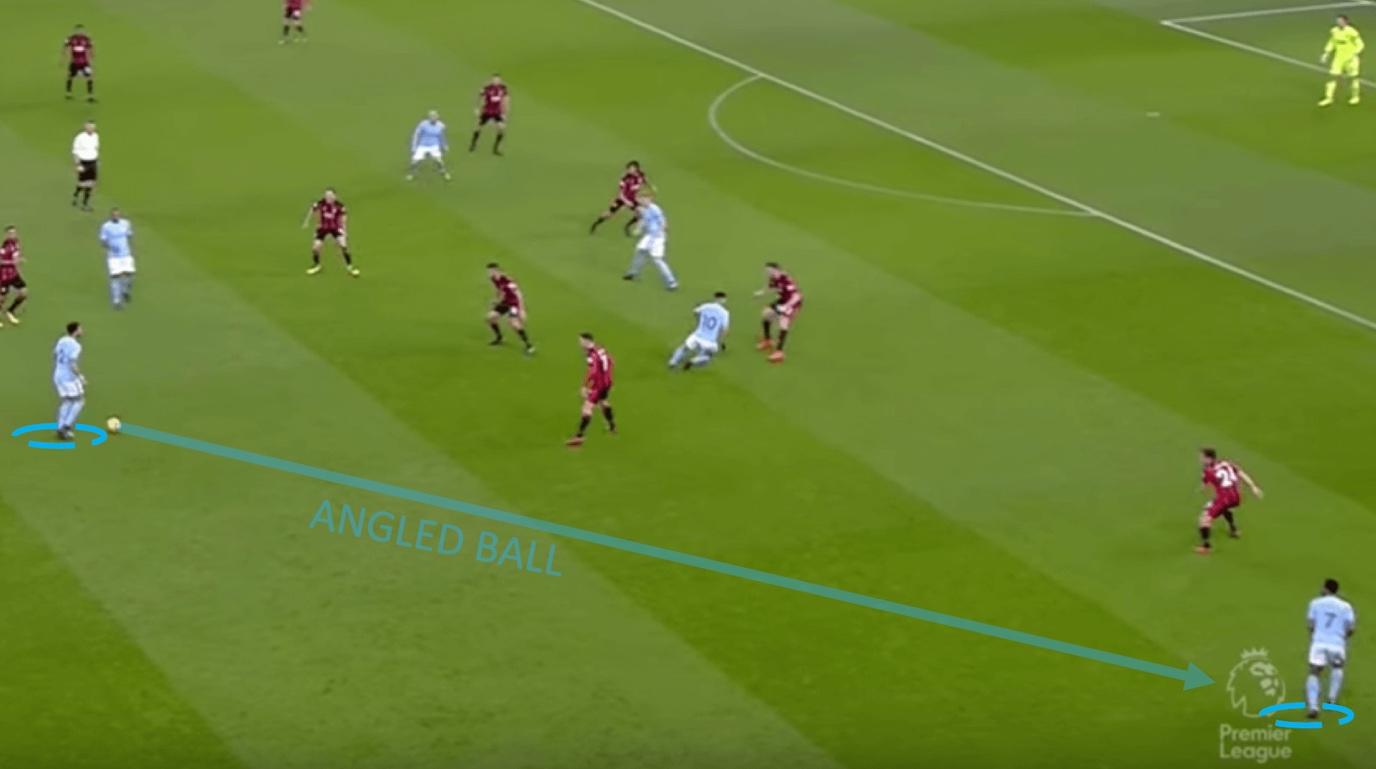 Here Walker is tasked as an inverted full back

Pep recognized City struggled to break down opponents who sat in a deep block. By creating width through this tactical innovation, he improved one of City’s inherent weaknesses.

In the Carabao Cup Final, Danilo played more as a centre back with Walker playing as a winger in possession.  It allowed City to create a box midfield.

These type of structure are mainly spoken about in regards to ball possession, but it also occurs without. As much as these structures give an advantage in possession, it can also be a way to be more flexible to the opposition team when out of possession. Often Pep will deploy Walker or Laporte as an extra centre back in games where the opposition have two strikers in transition moments. Therefore giving City an extra man in the counter press when they lose the ball.

Klopp loves it too

Jurgen Klopp has used it in the defensive phase also. Against St Pauli in the German Cup in 2014. He used Grosskreutz as centre midfielder who out of possession would become a left winger. They then coerced St Pauli to the left side where they had excellent numbers and more defensive type players could press effectively. The other side had Sokratis as a right back, who was waiting on any long diagonal balls. This suited his aerial ability. Setting up like this played into Dortmund’s strengths.  Potentially it was also used in targeting a weakness of St Pauli.

Another advantage of playing an unusual set up is the inexperience at which the opposition has with such a set up. Most players are used to playing teams with symmetrical formations. This develops sub-conscious behaviours and responses over years of practice. However, the asymmetrical structures place these responses under stress, as the opposition players are in unfamiliar positions.

When Ajax met Tottenham recently, in moments of the game, they resembled a 2-3-5 shape. It gave Tottenham problems for large portions of the game.

Tottenham struggled to cope with the unfamiliarity of the positioning of certain players. Any delay in decision making at the top level of football can have huge effects. Therefore by bringing forth an unfamiliar structure, a team can increase these moments of delay. Consequently these moments can lead to gaps in the opposition. These gaps can then be exploited for ball circulation, penetration and chance creation.

Whilst asymmetrical and unnatural structures have many inherent advantages, they also come with some disadvantages. As unnatural as these structures are for the opposition, they are similarly unnatural for the team implementing them. Therefore it takes a huge amount of expertise as a manager to implement these structures. The difficulty is often not creating the structures, but rather getting your player to be in the right place at the right time. Thus it can take a long amount of time for players to learn and adapt to the new system. As we know in football, most managers aren’t afforded much time.

The unnatural form of these systems mean that it takes a huge amount of detail to form them. Often this detail will come by way of player cues and instructions. A manager must be wary of the effect of over complicating the game therefore. This can have disastrous effects on both a collective and individual level. On an individual level, some players enjoy and thrive playing off the cuff. One such player would be Eden Hazard. Overloading certain types of players with information can therefore disrupt their individual game and have greater effects on the team overall as a result. As always, the devil is in the detail.

Finally, as in most of football, the quality of players is absolutely fundamental to a complex yet functioning system. Better players can take on more instructions. The ability of a player like Bernando silva cannot be underestimated. Cognitively he is able to recognize both offensive and defensive moments and how to react. This means remembering and implementing exactly the instructions of the coach for all phases of the game. He can do this whilst maintaining his all round general play. He is not affected by the complexity of the instructions given from his manager.

Furthermore, higher quality players can fulfil multiples roles in complex systems and therefore aid its successfulness. Kyle Walker is an example of this. He has the speed to play both as a full back and centre back in various moments of the game. The same could be said for a player such as Firmino, who is excellent both offensively and defensively.

As we have seen, Asymmetrical and atypical football systems are common in football. Many coaches employ them due to the ability to disrupt the opposition. They also use them to strengthen their own strengths and lessen their weaknesses. However, it takes an extremely competent set of players and management team in order to implement such structures.

Reverse engineering – the process of understanding how or why something works through deductive reasoning, in the hope of being able to recreate it. Brighton and Hove Albion, a club that avoided relegation to non-league Read more…

Games within games – how to identify and exploit opportunities in football.

Playing any game well requires a range of skills and knowledge. You need to understand the rules, the actions required to succeed within those rules, and have the ability to perform those actions well. As Read more…

Spending your way to success – an investor’s guide.

By ANDREW WATSON How much do budgets really affect a league table? Often we hear stakeholders in the game, be they fans, owners, managers, say things such as “On our budget we should…” or the Read more…